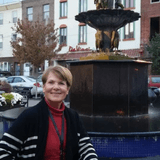 Typical South Philly Row House, brought up to date for you to enjoy! Walk to Center City attractions, or take nearby public transit. Famed Passyunk Ave. entertainment district is within steps.

I have a very open house. My house is your house.

When I host guests...

I can answer questions but let my guests do their own thing.

Great South Philly location!
Typical small South Philly Row home lovingly renovated and updated for us to enjoy.
I have a small upstairs guest room with a twin- sized sleeper sofa. Room is near shared Hall Bathroom, and has closet, drawer space, and window overlooking deck. Best for one person staying one week or less.
The Basement dorm offers a double-sized futon and two extra twin airbrds, plus TV, microwave, table and chairs, and a private half bathroom. The basement is a traditional “unfinished” South Philly basement - meaning it has a low ceiling with exposed pipes. The laundry, mechanicals, and homeowner storage are there too, but it is still a spacious room....and quite private. This room works well for two or three adults or two adults and a child. Guests will use shared bathroom on second floor for showering. This large room is best for more than one person or for one person staying for a week or more. It is ideal for students on a budget.
The living room/dining room, back garden, laundry* and kitchen (plus kitchen equipment, plates, and utensils) are also available for your use during your stay with me. Just clean up after use. Thanks!
Self serve breakfast snacks will be provided if requested ahead of time @ $5 per morning, but you can always make your own coffee or tea and use kitchen toaster, refrigerator, and stove to fix your own at no extra charge, and there are numerous breakfast and brunch restaurants nearby, as well as grocery stores.
*Please do only one load of laundry per week. Additional usage will be charged @ $5 per load.

No smoking, please.
And it goes without saying I won't permit drinking, drugs or parties in my house!

My house is in South Philadelphia near restaurants and shopping in famous Passyunk Square. You’ll find everything from the Philadelphia’s CHEESESTEAK empire, to five star celebrity chef restaurants within a few blocks. Walk to Center City in less than 25 minutes, or take the convenient bus or subway around town.

You're welcome to use the house as if it's your own, just be neat, quiet, and don't stay out too late. LOL.
I HAVE A DOG, so be wary if you have allergies or if you are afraid of animals!

Smoking is not allowed.

Once a host confirms they're available, you can go ahead and pay the 15% booking fee (maximum of 250 $£€ for longer term bookings) using a choice of payment methods: Visa, Mastercard, American Express, Maestro, Laser, JCB & PayPal (not available in certain countries). You then pay your host on arrival or as stated by your host on their profile and agreed by you on booking. Please be cautious if a host requests advance payment if its not included on their profile. Our hosts have been advised that if they wish to request advance payment they must make this explicit in their profile. We do not recommend the use of Money gram or Western Union.